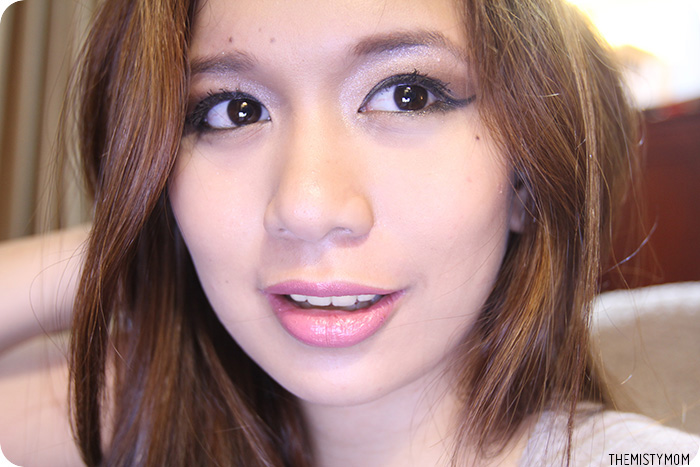 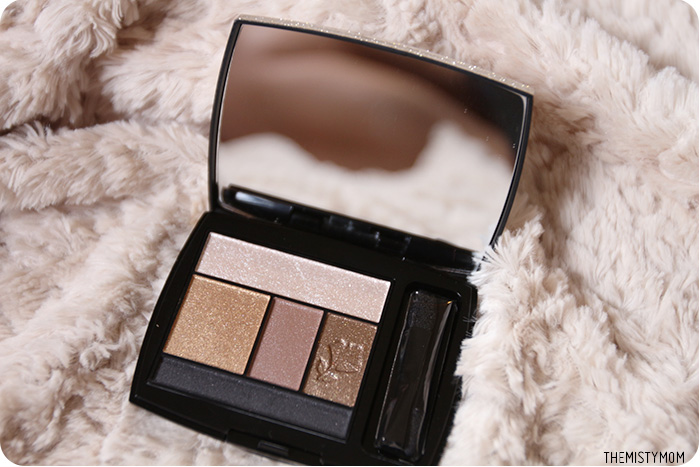 Did you know that this Lancome Golden Frenzy eye palette was used by Kim Kardashian for her wedding day? The fact that the Kim K chose and approved this for her signature smokey eye must mean something. I was actually apprehensive about this palette at first because I found the glitters too overwhelming as if it were shouting major fallout alert! However, I love the colors and although they seem dupe-able, I felt that blending 2 or all of these colors would be perfect for my NC30/35 skin.  Check out the jump for my full review.
*Eye makeup applied by my sister, Raiza.

The housing of this palette drew me to it in an instant! I love the fabulous glittering gold feel. It actually matches the beauty box it came with which you can see in this post. 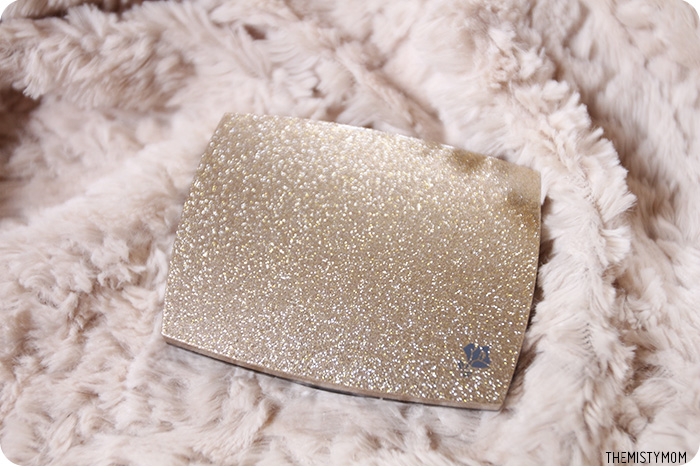 The palette consists of 5 eyeshadows with labels on them as follows — (top) all-over base, (second row L-R) lid, crease, highlighter, (bottom) liner/contour. I took out the transparent film that labelled them as such before taking the photos. Quite interesting for Lancome to suggest the rightmost caramel color as highlighter. For this look, we skipped on this suggestion and used the white (labelled as all-over base) shadow for highlighting instead.

All-over Base (top) — White eyeshadow with chunky silver glitters. Quite a heavy amount of fallout but when primed with a good primer, stays minimal. Though this was suggested as an all-over base, we used it for my inner corners and brow bone highlights.
Lid (leftmost) — Metallic gold with golden shimmers. Quite pigmented with and can be blended easily on the lids. We used it all over the lids.
Crease — Matte medium brown with no glitter / shimmer. Used it for crease and outer V.
Highlight — Metallic darker gold taupe with chunky gold glitter / shimmer. Used on outer V blended with the crease color.
Liner — Matte black. Surprisingly very intense that makes it great to use as eyeliner.Very pigmented and lasted the whole day. Skipped on using liquid liner or kohl eyeliner.
Below are un-primed one-layer swatches of the shadows. I forgot to swatch the black one, forgive me. It’s this pregnancy brain drain I’m experiencing that’s the cause of this (After swatching, I thought to myself how incomplete it looked but didn’t bother to analyze and discover I missed one shadow swatch). 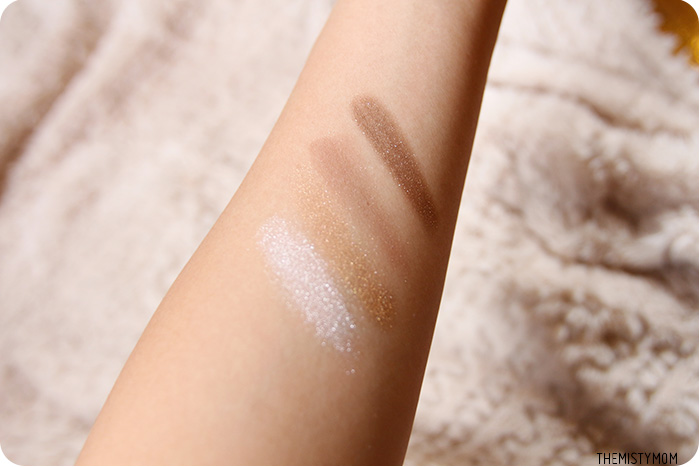 I would say the shadows are quite pigmented considering this is only the first swatch. As you can see, the amount of glitter fallout from the white shadow is also quite heavy. The other shadows aren’t as shimmery/glittery but thanks to the white one’s glitters, they’ve been generously given some glitters as well. I would suggest to put below your eyes when applying so the glitters don’t fall on your cheeks / all over the face. We had to clean my face with makeup remover from all the glitter fallout of the white shadow.
The texture, however, is impressive. I didn’t think they would be as smooth as they are by looking at them in pan. I haven’t gone out all night with them but they sat on my lids (with only the NYX Jumbo Pencil in Milk as primer) without creasing or fading even a bit for a good 7-8 hours. I would imagine longer wear and minmal fallout with the Urban Decay Primer Potion.

FACE OF THE DAY 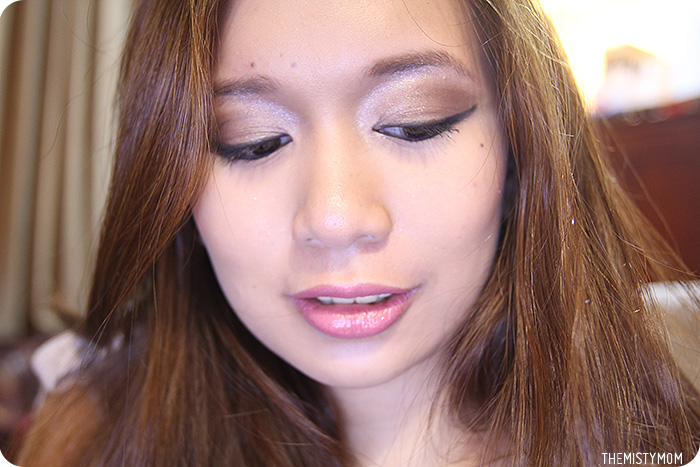 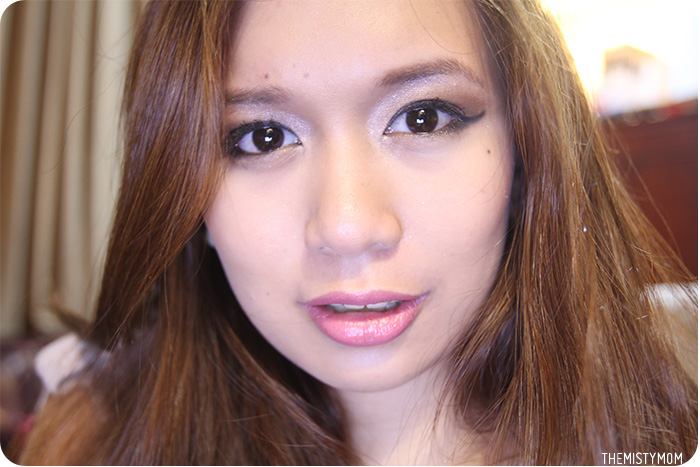 I asked my sister to apply the eye makeup as I was too tired to do it myself (the backaches my pregnant self is experiencing can’t last me through a few minutes of eye makeup application). My eyes are primed with NYX Jumbo Pencil in Milk, instead of the usual Urban Decay Primer Potion. It worked pretty well and made the shadows pop and more pigmented than they already are.
My favorite part is the highlight shadow which may look a bit overdone but I quite like the effect they have on my eyes. Also, I’m impressed with the black shadow as eyeliner for it turned out quite pigmented as compared to my Naked Palette 2‘s Blackout. It stayed put the whole day, no smudging nor transferring occurred which I found very amazing.
SUMMARY
PROS
1. Nicely pigmented colors
2. Looks great on girls with skintone like mine (NC35), but also perfect for darker skintones
3. Blends easily and very well despite using just an average blending brush
4. Long-lasting even without primer (I tried to remove the un-primed swatches with water and it took some effort!)
5. Sleek packaging with golden glamour written all over
6. Love the matte black eyeshadow for eyeliner. Also great for smokey eyes as the texture is very silky compared to most black eyeshadows I have
CONS
1. White shadow fallout is quite heavy when not primed well
2. For those who are OCD, the case picks up fingerprints
3. Dupe-able colors, not too unique
4. Highlight shade is not really great as a highlight and also has some fallout
5. Expensive for 5 shadows with only
FINAL THOUGHTS
Would I repurchase? If I can use this all up, then that’s when I’ll think about it but for now it’s a NO. It’s a really beautiful palette but it’s not quite unique that I’d lose sleep if I run out of it. I like the black and white shadows the most (except of course for the glitter fallout of the white one but when kept at bay, I love it). If Lancome came out with a duo of the black and white shadows (with the white having better glitter performance), I’ll definitely buy it! But for the rest of the colors, the Naked palettes have probably good dupes of them.
Did you find apk for android? You can find new Free Android Games and apps.